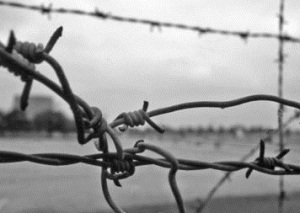 The nagging question that comes to mind after reading this is, “When we can all go to Google and see satellite images of North Korean labor camps, and when we know that torture, starvation, privation and death are the fuel that makes it all possible, why have we done nothing about it?” It is a question that is raised in Blaine Harden’s book that shares the dramatic and unlikely escape of Shin Dong-hyuk from Camp 14, a vast labor camp ruled with brutality and the threat of being “shot immediately” ( an oft-repeated phrase in the camp’s rules) for any one of the many transgressions for which that is the penalty.

One Day in the Life of Ivan Denisovich left me shivering on a hot summer day a few years ago. Solzhenitsyn’s tale of 24 hours of Siberian labor-camp life is, for many, the standard by which this genre is judged (along with Wiesel’s Night, of course). Harden comes close with Shin’s tale, the difference being that this is a non-fiction work based on extensive interviews with the subject. Both are chilling in the depravity and inhumanity that they convey.

Are we really capable of treating each other this way? Is this possible in the 21st century? Obviously, yes.

The details that leave one cold and numb simply by reading about them are the daily routine for people who are born, live and die without ever getting past the high-voltage electric fences that confine the “hostile classes” in North Korea. This is a culture built on the foundation of well-founded distrust and survival at all costs – even the brutal public executions of family members.

Reading this gives new insight on the current activities of the county and its new young leader, Kim Jung Un. The sabre rattling and rhetoric, the videos of American landmarks in flames, are all meant to convey a message. Could it all be nothing more than rallying cries for internal consumption? Could it be justification meant to help a population kept in check by fear and the threat of slow, painful death focused on imaginary external threats? Whatever the motivation, there will be no easy solution.

Will North Korean leadership eventually burn out, a 60-year virus that eventually kills its host? It is hard to believe that a regime rooted in ruthlessness has lasted this long, or that it can go on much longer under the scrutiny of ever-sharper satellite images and more efficient, if secret and forbidden, lines of communication from inside the country. When it finally happens, it will take the entire world and its resources to heal this people over generations.

Shin’s experiences let us know the darkness which the world must someday face. How many nameless, faceless victims will perish in the gears of the Kim machine before the world acts?